By: Home Telling
In: Seaside, Sites
With: 0 Comments

The modern island was formed probably 4.5 to 5 million years ago, and has been inhabited since the Stone Age. Later, it was probably an Etruscan military stronghold. Under the Roman dominion, Aegilium Insula or Igillia Insula it was an important base in the Tyrrhenian Sea, and was cited briefly by Julius Caesar in his De Bello Civili,by Pliny,[8] by Pomponius Mela,[9] and by the fifth-century AD poet Rutilius Claudius Namatianus, who celebrated Igilium’s successful repulse of the Getae and safe harbor for Romans, in a time when Igilium’s slopes were still wooded.[10]

In 805, the island was donated by Charlemagne to the abbey of the Tre Fontane in Rome, and was later successively a possession of the Aldobrandeschi, Pannocchieschi, Caetani, and Orsini families, and of the municipality of Perugia. In 1241, the Sicilian and Pisan fleet of Emperor Frederick II destroyed a Genoese fleet in the Battle of Giglio. From 1264, Isola del Giglio was a Pisan dominion, from which it passed to the Medici family. It suffered several Saracen attacks, which ended only in 1799.

On 14 June 1646, Grand Admiral Jean Armand de Maillé-Brézé was killed at the Battle of Orbetello, at sunset on his flagship the Grand Saint Louis.

Alongside its history, the island was always renowned for its mineral ore: many columns and buildings in Rome were built with the Gigliese granite.

A New Bold Language of Design

END_OF_DOCUMENT_TOKEN_TO_BE_REPLACED

Welcome to My Magazine

END_OF_DOCUMENT_TOKEN_TO_BE_REPLACED 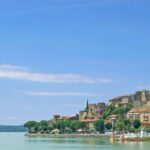 Trasimeno: a lake at the center of history

Telling houses …it means telling the light that passes through them, the

We use cookies on our website to give you the most relevant experience by remembering your preferences and repeat visits. By clicking “Accept”, you consent to the use of ALL the cookies.
Cookie settingsACCEPT
Manage consent

This website uses cookies to improve your experience while you navigate through the website. Out of these, the cookies that are categorized as necessary are stored on your browser as they are essential for the working of basic functionalities of the website. We also use third-party cookies that help us analyze and understand how you use this website. These cookies will be stored in your browser only with your consent. You also have the option to opt-out of these cookies. But opting out of some of these cookies may affect your browsing experience.
Necessary Always Enabled

Performance cookies are used to understand and analyze the key performance indexes of the website which helps in delivering a better user experience for the visitors.

Analytical cookies are used to understand how visitors interact with the website. These cookies help provide information on metrics the number of visitors, bounce rate, traffic source, etc.

Advertisement cookies are used to provide visitors with relevant ads and marketing campaigns. These cookies track visitors across websites and collect information to provide customized ads.

Other uncategorized cookies are those that are being analyzed and have not been classified into a category as yet.